Tara has been active in the Jewish community since her earliest years. As a child, she enjoyed religious school and attending 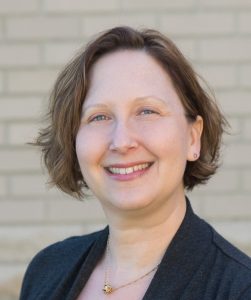 Shabbat services with her father. She worked at the preschool day camp for 15 years and later taught religious school during college and graduate school.

It’s hard to mention all of her volunteerism in this small space. In Philadelphia, Tara volunteered with Jewish Family and Children’s Services as a Youth Mitzvah Corps leader, worked with bar/bat mitzvah students during service-learning projects, and served as a volunteer chaplain visiting hospitalized children and their families. Later, Tara became active with the Basser Center for BRCA at Penn Medicine’s Abrahamson Cancer Center following her BRCA 2+ diagnosis and surgeries. She became involved with Sharsheret, a Jewish Breast Cancer organization, and continues today as a Peer Supporter.

When Tara and Adam moved to Dayton in 2014, she soon took up volunteering again, at Hillel Academy and at Dayton Children’s Hospital in its Child Life unit. In 2015, Tara began her current professional position as Jewish Family Services Director for the Jewish Federation of Greater Dayton. While here, she has provided holiday outreach to Jewish female inmates by visiting and leading abbreviated services. Tara remains connected to Hillel Academy by serving on their Advisory Board, and also serves on Beth Abraham’s Board as Vice President of Programming as well as serving on numerous committees over the years.

Tara is currently completing her Executive Masters in Jewish Professional Studies at the Spertus Institute for Jewish Learning and Leadership.

Tara and her husband Adam live with their two fur babies (cats), Lucy and Bisque. Among her favorite titles is “Aunt Tara” and godmom.