Jody started her volunteerism in her youth, as a member of Young Judea and serving as a JCC Pre-Camp Counselor. While 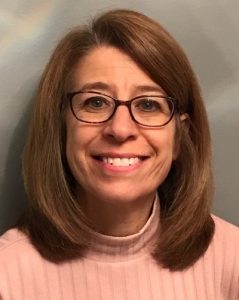 getting a Business Degree at OSU, Jody got involved in the first Hillel Jewish Student Activities Board.

Continuing with her desire to serve others, Jody’s first job was at Riverside Methodist Hospital in Columbus, as Volunteer Coordinator for over 500 volunteers. She was soon promoted to HR Recruiter.

Jody and Todd moved to Dayton in 1990, where she quickly became part of their new Jewish community. This included helping in the Jewish Federation office, volunteering on the JCC Early Childhood Committee and becoming a member of the JCC Board. She has served on the Jewish Family Services Board for 5 years.

Jody was active with TWIGs and became a familiar and trusted volunteer at Oakwood Schools – handling many events & activities throughout her three children’s school years. In addition, her service on the Board of Secret Smiles of Dayton, helped to provide bedding for children in need in our community.

In 2003, Jody became involved in The Greater Dayton Rowing Association, which Todd co-founded.  Together, they ran The Rookie Rower Program for eight summers for junior high kids from all across the Miami Valley.   This led her to becoming Administrator of the High School Rowing Program.  A huge feather in her cap was when she spear-headed “Dayton’s Row for the Cure” with all benefits going to the Susan G. Komen Foundation.

Jody’s motto: “Knowing I do what I can, while I can….so I always know that I did what I could, when I could!”